For years I fought God. (Sometimes, I still unintentionally do) Yes, I was in church but church wasn’t in me. I could recite scriptures but I was still in a place of suffering. I was faithful to worship but I wasn’t worshipping and the truth is, I didn’t know how because I was wounded. Somewhere on this journey, I was wounded by church. Maybe it was due to being tired of traditions, overlooked because of the gender I was born with, overworked but undervalued. Whatever it was, I was in worship with open wounds. Then God called me, He chose me and He set me apart and I knew things had to change. So, I said YES to grace and I said YES to God.

I shared this because you need to know … God isn’t making you suffer intentionally, He’s intentionally lengthening your journey because He needs you ready when you get to destiny. Understand, you may be walking in your destiny now but it doesn’t mean you’ve reached the part where it pays better, the stress isn’t so heavy, your money ain’t funny or etc. Truth is, God needs you prepared to handle everything that comes with destiny. See, when you reach the platform of true destiny; the pain, the problems, the people, the purpose AND the paychecks are different (increase). If you can’t handle being talked about, lied on, overlooked, underpaid and tired on this level; you sure in heaven, won’t make it in destiny.

When David got ready to fight Goliath, there were folk around him who’d already counted him out. “He’s too small.” “Who do he think he is?” “He’s no match for that giant.” “He’ll never make it.” He was even taunted by Goliath, who was bold enough to cross enemy lines to confront him. Goliath tells David in 1 Samuel 17:44, ““Come here,” he called to David, “and I will give your flesh to the birds of the air and the beasts of the field!”” David responds, in 1 Samuel 17:45, “You come against me with a dagger, spear, and sword, but I come against you in the name of the LORD of Hosts, the God of the armies of Israel, whom you have defied.” You know how the story ends, right? David killed Goliath with a stone to the forehead. Afterwards, though (because the sermons usually stops there), David, bible shares, ran and stood on Goliath, took Goliath’s sword and cut off his head. Here’s what I don’t want you to miss. The Philistines didn’t move until after David had cut off Goliath’s head. Why am I sharing this? Two few reasons actually. 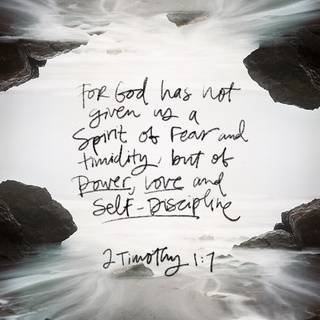 1. Some of you are more focused on what folk are saying and it’s causing you to lose sight of the task at hand. Let them talk, you’ve got a battle to win!
2. You may have knocked your opponent down and even killed him but those with him, won’t leave until you make a drastic move.

In other words, you need to let those who are bold enough to walk into your face/space to taunt/kill you, know you ain’t scared! I said what I said! No, you don’t have to cut off their head, like David but you might have to cross enemy lines, stand on their back and take their sword just in case! Look, God didn’t give us a spirit of fear but of power, love and discipline (2 Timothy 1:7). It doesn’t matter that you don’t look the part, you got power. You may not have the armor but you got power. May have never fought in this kind of fight but you got power. Power from a God who never fails us! David’s power didn’t come from a sword, he didn’t have one. David’s power didn’t come from his armor, he didn’t have any. His power came from the God he worshipped, trusted, loved and served. You have the same power but you’ve got to stop listening to the hecklers and trust the God you serve because He’ll never place you in a battle He hasn’t equipped you for. Even if it happens to be a battle He’ll let you lose, He always has His reasons why. You have the power but you’ve got to believe it, tap into it then use it.