I tried to write this on yesterday but God would not release it until today. A day whose date deemed worthy of displaying on my right wrist. See, it was four years + one day ago, on 8/28/2014, I stopped running from God’s call on my life but it would be the day after that my life begin to align with God’s will. I have shared this testimony before but I could not let this day pass without giving somebody hope for today. No, I am not about to sell you a fairy tale because I need you to sow into me. I am not about to convince you that saying yes to God will erase all your troubles. What I will share is how ME saying yes, restored what I did not even realize was broken. I spoke yes and it stitched me when I could not see I was bleeding. I stood in the bathroom stall at work, crying and apologizing to God for all the time I had wasted while giving Him my yes. I knew I was tired but still trying to fight. Weighed down and wounded yet still trying to act like all was good. I was at the edge. Then I said yes. Has it always been good? No because I am attacked more today. Has it always been easy? No because there are days, I do not feel like being holy. Has it always been fair? No, but it has been all God. It was four years + one day ago, everything shifted in my life for the better. What does this mean today? Truth is, I do not know. Bible shares, it was on the fourth day God divided day and night. There are four seasons and four synoptic gospels. Four signifies stability, order and completion. While I wish I could say what this fourth year will bring, I cannot but I will say, I am still trusting God with my yes. Why? Because He has not failed me yet. Although I have seen some deaths, experienced some sickness and some losses; I still trust God with my yes. Why? Because these last four years have nothing on the times, I was playing with God.

See, the times before the yes, I had religion but no relationship with God. The times before the yes, I had become good at wearing my mask. The times before the yes, we were barely surviving but I dare not show you my struggle. Oh but four years + one day later! Four, my marked sacred time, my year of completeness after God has worked out all the residue of my past hurts, scar tissue, unhealed wounds and unsaid words of forgiveness. Four, the year God thrusts me into the fullness of His anointing and I do not even know what it means yet I trust Him. Four, when God separates me from the darkness. Four years + one day marks the year I stopped playing and started, for real, praying. Four years + one day signifies the year I walked into the light of God’s word and for real started trusting Him. Some of you have read my testimony but it was four years + one day ago that we packed up our apartment and moved without a destination because God said it. It was four years + one day ago that we struck out on faith without knowing where we were stepping. I trusted God with my yes then and I trust Him with my yes now. What about you? Sure, you could have already given God your yes and it still feels like the enemy has made your house, his home. You could be in your 14th year and still dealing with temptations, being overlooked, overworked and underpaid. This could be your 24th year and the worst of them all, I do not know but trust God. Because I hear God saying, “But I have prayed for you, that your faith may not fail; and you, when once you have turned again, strengthen your brothers. Luke 22:32.” It has been four years + one day for me and I am still saying yes, what about you? 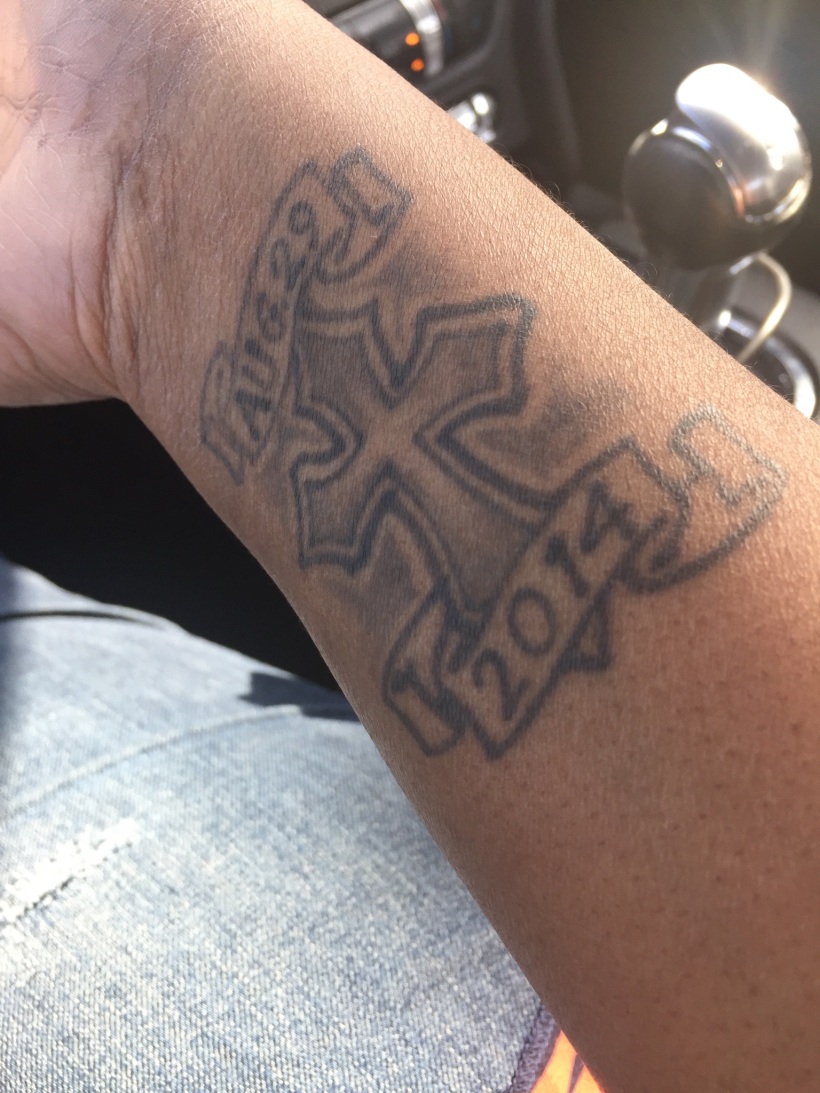 Oh Sunday ... Did somebody say casual Sunday? Why yes, yes I did. 😂 Happy Sunday y’all. New Day New Mercy New Chances What are you doing with them? #sunday #sundayvibes #NewMercies #SameGrace #AnotherChance #Dontwasteit #Luke145
Imagine standing face to face with an opponent whose face is obstructed from view. You have no idea who it is, but they’ve been the one taunting and tormenting you. This opponent’s voice keeps you up at night, paralyzing you with fear. It’s the one holding purpose in your sight but not allowing you to get near. This opponent is familiar, its voice is one you’ve heard too. Now imagine looking in the mirror and the opponent is YOU. This journal, Surviving Me was created by prayer and God’s guidance because I’ve come to understand, sometimes we’re our own worst enemy. It’s not that we don’t believe in ourself or trust who God has made us, but dealing with the strains of life can make you pause when you should press. This journal will touch on subjects of who am I, what’s hindering me and how do I survive; to help you divorce things you fight against daily. However, this journal isn’t a magical potion, it may not even be the answer you need; but I pray it helps on your journey of surviving when the enemy you’re fighting is you. Surviving Me: The Journal — 7x10, 450 pages $18 💚 www.amazon.com/dp/1672017009 . . #ChristianJournal #JournalingsavedMe #SurvivingME #Imustsurvive #Luke145 #Blessedisshewhobelieves #WhoareYou #Whatshinderingyou #HowdoIsurvive #Broken #Restoration #DivorceGranted #LakishaJohnson #creativejournal #journalinspiration #christianjournaling #shewritestruth #shewrites #journalcommunity #journalcommunity #journaladdict #journallove #journalingbible #journaljunkie 📸 Angel Bearfield
Happy Book-a-versary to the book that pushed me into #ChristianFiction .... Dear God ... Hear my prayer! . . This book was after God shut me down for an entire year. This book was after I thought about giving up on writing. This book was only the beginning of what God had planned. . . THIS BOOK! . . #1ChristianFictionBook of the year for 2019 Over 270 reviews on Amazon (not all of them are good) Still a best seller . . THIS BOOK! . . Jayme finds herself needing God, yet she doesn’t know how to reach Him. She longs for God but isn’t sure what to say, until she opens her mouth to pray...Dear God, hear my prayer https://www.amazon.com/dp/B079G68BN3 #AfricanAmericanChristian #survivingabuse #UrbanChristianFiction #ACFW #Shewritestruth #AAChristianFiction #DearGod #Whatareyoureading #LakishaJohnson #AbuseDidntWin #SurvivingSexualAbuse #HearmyPrayer #prayingwoman #molestationawareness #thursdaymotivation
Imagine losing your baby and your faith, at the same time ... 2:32 AM, to be exact. . . Now, you’re left pondering questions, you can’t answer because while the bible tells you how to fight the enemy, nobody tells you what do you do when it feels like it is God you’re up against. . 2:32 AM ... an emotional journey of faith rediscovery. . https://www.amazon.com/dp/B07CJNXY21/ : #bookstagram #griefsupport #bibliophile #AllAuthor #infantlossawareness #SIDS #amothersprayer #AAChristianFiction #UrbanChristianFiction #buryingachild #amotherspain #UrbanChristianFiction #Brokenness #childlessmother #suddeninfantdeathsyndromeawareness #sidsawareness #ACFW #shewritestruth
What if the man who stands to proclaim God’s word is the same one hurting you, behind closed doors? . : Since the age of 14, Jayme’s life has been hell and she has one person to thank for it, Pastor James Madison. : He stood in the pulpit on Sundays waving the same hands that abused her at night. He glorified God with the same mouth he used to chip away her self-esteem, daily. He was a man of God who had turned her away from the same God he told people they needed to serve. : He was the man who was supposed to pray for, take care of and eventually love her. Instead he preyed on, took advantage of and shattered her heart before it had a chance to truly love someone else. : Now, 14 years and a son later, she finds herself needing God yet she doesn’t know how to reach Him. She longs for God but isn’t sure He can hear a sinner’s prayer until she starts to pray, Dear God... : https://www.amazon.com/dp/B079G68BN3 : : #bookstagramindia #bookstagramit #bookworm #kindle #bookstagram #bookstagrammexico #Bookstagrammer #bookstagramuk #bookworms #totalbooknerd #bookphotography #bookclub #bookaholic #bookporn #booknerd #bookshelf #IGreads #bookblogger #writersofinstagram #writerscommunity #bookish #booklove #booksofInstagram #message #bibliophile #AllAuthor #ChristianFiction #bookshelfdecor #Bookshelf
“The 11th Commandment, just might save your life. Thou Shalt Never Forget His Wife.” Have you read, reviewed and recommended? . . — The Forgotten Wife . . All Rylee wants is her husband's attention. . . She used to be the apple of Todd's eye but no matter what she did, lately, he was just too busy to notice her. . . She could not help but wonder why. . . Then one day, an unexpected email, subject line: Forgotten Wife and little did she know, it was about to play a major part in her life. . . They say first comes love then comes ... a kidnapping, attacks, lies and affairs. . . Someone is out for blood but who, what, when and why? . . Secrets are revealed and Rylee fears for her life, when all she ever wanted was not to be The Forgotten Wife . . https://www.amazon.com/dp/B07DRQ8NPR : : #picoftheday #booklovers #bookworm #kindle #bookstagram #book #Bookstagrammer #photooftheday #bookworms #totalbooknerd #bookphotography #bookclub #bookaholic #bookporn #booknerd #bookshelf #IGreads #bookblogger #writersofinstagram #writerscommunity #bookish #booklove #booksofInstagram #theforgottenwife #bibliophile #AllAuthor #indieauthor #ForgottenWife #bookshelfstyling #readwithus