“Now there was a rich man dressed in purple and fine linen, who lived each day in joyous splendor. And a beggar named Lazarus lay at his gate, covered with sores and longing to be fed with the crumbs that fell from the rich man’s table. Even the dogs came and licked his sores.”

Sometimes the blessing isn’t in the ‘lot’ that you give but it is in the crumbs. In the parable above, Lazarus (the beggar) did not ask for a meal, he only wanted the little that fell from the rich man’s table. The beggar did not ask for a chicken leg, he said I’ll take the crumbs. He didn’t ask for a cake of bread, he said the crumbs will do. Yet many times we miss the blessing in the crumbs. Our mind has been tricked to believe we need it all when the crumbs will do. Our eyes gravitate to the abundance when the crumbs will satisfy. Beloved, there is a blessing, even in the crumbs. In this parable, the rich man wouldn’t have even missed the crumbs. In fact, it would not have even hurt him to give Lazarus a meal but he didn’t. Instead, he walked past him, every time he moved by way of the gate. And because of this, when the rich man died, he went to hell and when he got there, he cried out, “Father Abraham, have mercy on me and send Lazarus to dip the tip of his finger in water and cool my tongue. For I am in agony in this fire (Luke 16:24).” The rich man now needed Lazarus, the beggar.

– Number one, sometimes the blessing isn’t in your sowing of abundance because God will bless your crumbs. The beggar could have been the very thing used to save the rich man from being sent to hell. What small seed are you holding that God has asked of you to sow?

– Number two, you never know who you will need. The rich man thought the beggar needed him when in actuality, it was the rich man who needed the beggar. The very person you are overlooking, in this season, could be the one person you need to bring you through it. 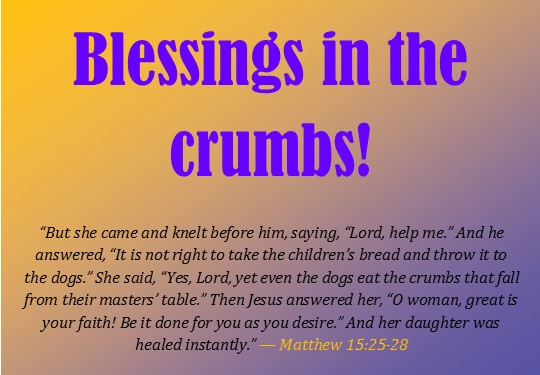